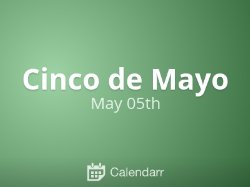 Cinco de Mayo, which translates to "the fifth of May", is celebrated every year on May 5. It commemorates the victory of the Mexican over the French in the Battle of Puebla, in 1862, during the Franco-Mexican War.

The day has become more popular in the United States than in Mexico, and it serves as a commemoration of Mexican culture in America.

Cinco de Mayo is not a public holiday, and as such, schools and businesses remain open.